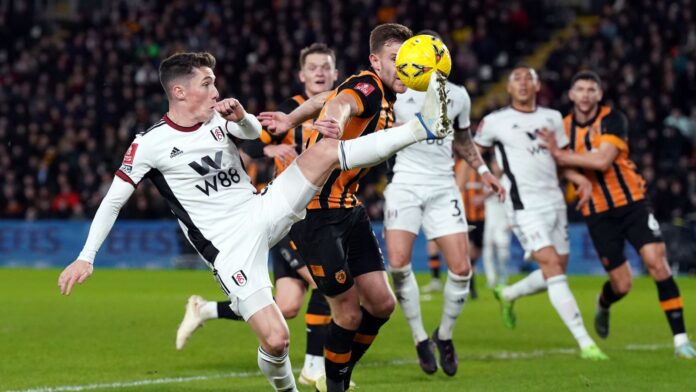 With a win over Hull City, Fulham advanced to the FA Cup fourth round thanks to goals from Layvin Kurzawa and Dan James.

Left-back Kurzawa scored into an empty net in the 37th minute, and James raced clear with the game’s final kick to add a second.

YOU MAY ALSO LIKE: Tottenham Hotspur Was Victorious Over Portsmouth

The decision was justified, however, as the Premier League club secured a place in Sunday’s draw.

Hull City made a strong start and should have taken the lead in the fourth minute at the MKM Stadium.

Harvey Vale was able to sneak in after Bobby de Cordova-Reid failed to deal with a hopeful punt forward, only to poke the ball wide with only Fulham goalkeeper Marek Rodak to beat.

Soon after, Lewis Coyle’s shot was turned around the post by Rodak, as Fulham gradually gained control of the game.

Andreas Pereira came close twice in four minutes, first with an effort from the edge of the box that Hull goalkeeper Matt Ingram tipped over the bar, and then firing over on the rebound after Tom Cairney’s cross from the left had picked out his late run into the area.

Ingram could only push Harry Wilson’s curling shot to the corner of the six-yard box, where Kurzawa was waiting to cushion the ball home two minutes later.

Vinicius Junior had a chance to double Fulham’s lead just past the hour mark, but dragged his shot wide, and the home side took control from there.

YOU MAY ALSO LIKE: Gillingham Was Beaten By Leicester City In FA Cup Match

Substitutes Aaron Connolly, on loan from Brighton, and Benjamin Tetteh gave Hull City a boost, and another sub, Oscar Estupinan, had Hull’s best chance of the second half, a stoppage-time header tipped over by Rodak, but Fulham held firm.

Fulham were able to break after Ingram was sent up for a long throw-in deep into injury time, and James’ pace saw him streak clear to roll the ball home to seal the win.

Alfa Romeo Has Named An Italian As Its Team Representative For...

Isak Marked His Return From Injury By Scoring For Newcastle Against...

Arsenal Beat Tottenham And Are 8 Points Ahead Of City

ABOUT US
SportRazzi is a sports news and result website.
FOLLOW US
© 2023 SportRazzi a member of SurgeZirc Media / by Valiters Technologies